The Argentinean Secretary of State for Infrastructure and Water Policy, Pablo Bereciartua, visited KWR on Monday 23 April. The Secretary of State was accompanied by the Argentinean Ambassador to the Netherlands, Héctor Horacio Salvador. During the visit, Bereciartua and KWR Director Wim van Vierssen signed a cooperation agreement for infrastructure and water. On the basis of this Memorandum of Understanding, KWR will undertake a pilot project in Argentina for the removal of arsenic during the production of drinking water. In Argentina, high concentrations of arsenic occur naturally in the groundwater.

Argentina faces various challenges when it comes to water. With a population of more than 43 million, there are 7 million Argentineans who do not have access to clean drinking water and almost 20 million people are not connected to the sewer system. In addition, high concentrations of toxic arsenic occur naturally in the groundwater in Argentina. The World Health Organization, WHO, assumes a standard for arsenic of 10 μg/l. The standard in Argentina is often 50 μg/l.

Cooperation between the Netherlands and Argentina

This cooperation fits within the ambitious water plan developed by the Argentinean President, Mauricio Macri, whereby all people are to have access to clean drinking water. In March 2017, during a visit by Macri to the Netherlands, high level discussions were held about cooperation between both countries with regard to, amongst other things, water.

In the Netherlands, KWR has experience of purifying groundwater which has naturally occurring concentrations of arsenic. Dutch drinking water companies strive to produce drinking water with very low concentrations of arsenic (1 µg/l). Various water companies are investing in technology to remove arsenic to this target level. In Argentina there is interest in sharing knowledge in the field of arsenic removal.

In March, Gerard van den Berg, who is responsible at KWR for international cooperation, and researcher Arslan Ahmad, paid a working visit to Argentina. At the Argentinean Ministry of the Interior they spoke with Pablo Bereciartua, the Secretary of State for Infrastructure and Water Policy and with AySA, the water company for Buenos Aires – which supplies around 15 million people with drinking water. The topic of the discussion was a pilot project to investigate whether the way in which arsenic is removed from groundwater in the Netherlands could also be used in Argentina. The implementation of this pilot project is now a step closer with the signing of the Memorandum of Understanding by the Argentinean Secretary of State and KWR Director Prof. Dr. Wim van Vierssen for the cooperation.

The fact that Argentina has specifically chosen to cooperate with the Netherlands on this pilot project is a logical choice, says Gerard van den Berg. “The Netherlands has a long-standing good reputation when it comes to water. We have a good water infrastructure and our drinking water is of high quality. We also have Queen Máxima, who originates from Argentina, and who is an excellent ambassador for our country. For us, KWR, the cooperation is interesting because we have the knowledge required for resolving the problems, problems which Argentina is taking very seriously. Our specialist knowledge can be applied perfectly in Argentina.”

Finally, the Watershare membership of AySA, the water company that supplies Buenos Aires, and which will be officially signed on Wednesday 25 April, also fits within the broader cooperation between the Netherlands and Argentina. This consortium of water (research) companies now has 21 members, who share knowledge in order to jointly use their worldwide expertise in the field of drinking water and waste water in order to address local water challenges. 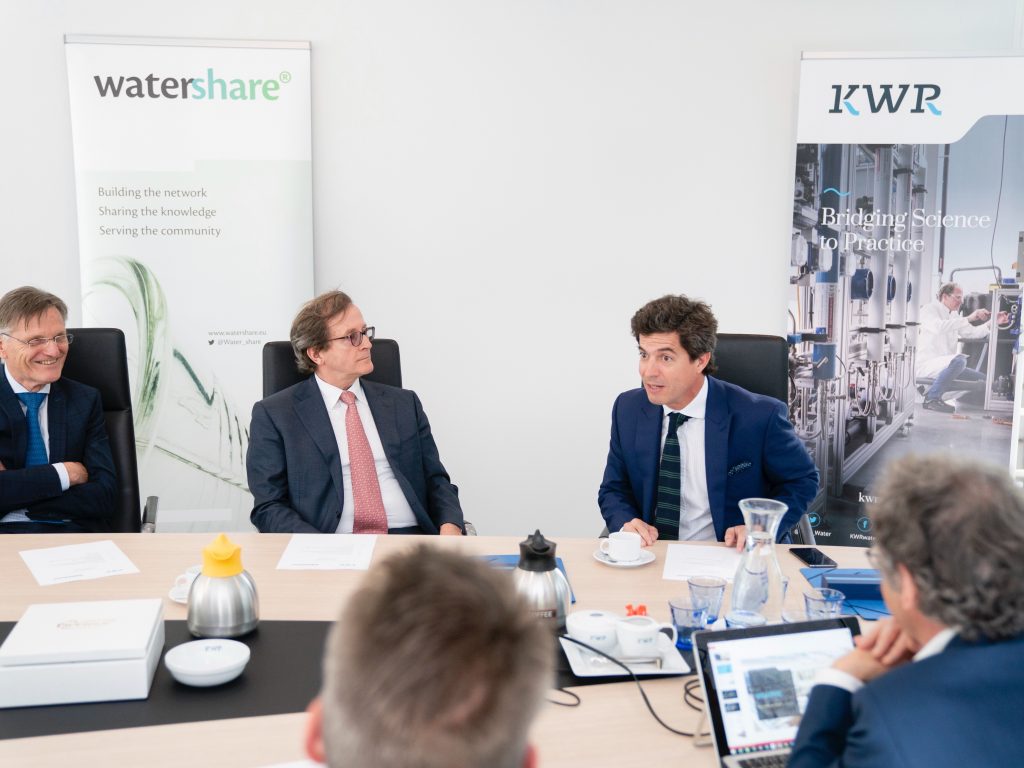 KWR’s CEO Wim van Vierssen (left) receives the ambassador of Argentina to the Netherlands, Héctor Horacio Salvador (centre), and the Argentinian State Secretary for Infrastructure and Water Policy, Pablo Bereciartua (right), for the signing of a collaboration agreement.