The generation of renewable energy by exploiting the earth’s heat using geothermal technology is developing rapidly in the Netherlands. For a responsible continued growth of geothermics in the country it is important that its possible impact on other uses of the subsurface is taken into consideration. So that any hazards can whenever possible be limited. KWR researcher Niels Hartog, under a commission from Vewin, has drawn up an inventory of the hazards presented by geothermal technology to groundwater. Hartog proposes that a number of hazards can be significantly reduced and better monitored, and outlines various possible measures to this end.

Geothermics is a technique in which the earth’s heat is extracted from deep strata for heating purposes and, when the temperatures are sufficiently high, for the production of electricity. First applied a century ago in Italy, this use of the earth’s heat is now developing worldwide, primarily because it avoids CO2 emissions. In countries like Italy and Iceland, high temperatures are found in strata just below the earth’s surface. However, in the Netherlands we only encounter water at temperatures of 80-90°C at depths of about two kilometres. This relatively great depth from which to extract the heat through wells, is one of the reasons that geothermal energy production has only gotten underway over the past ten years in our country.

Geothermics involves pumping up hot water from deep earth strata through a production well. Following a heat exchange, the cooled water (30-40°C) is then returned through an injection well to its original depth in the subsurface. During the installation of geothermal systems, the deep wells drill through a number of strata. This is also the case in other deep-subsurface activities, such as oil and gas extraction. In the Netherlands, these strata, down to depths of around 300 metres, include the aquifers which contain fresh groundwater. This groundwater is the source of 60% of the country’s drinking water supply, and is also used for industrial and agricultural purposes. Besides their use for groundwater abstraction, these shallow strata are also used for Aquifer Thermal Energy Storage (ATES) systems, for instance. 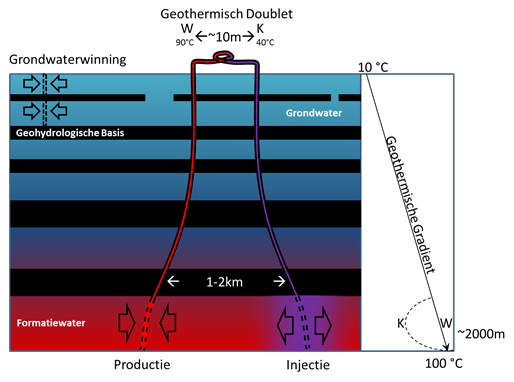 In order to protect the groundwater, it is important to focus on the possible hazards of geothermics, and to take measures to adequately monitor and limit them (complete prevention being impossible). Examples of a number of measures mentioned in the report follow below.

As in the case of all deep wells, it is important, when drilling through groundwater aquifers, to properly seal off the intermediary claystone layers. After all, these layers protect the groundwater from contamination, both from above and below. Naturally, extra attention needs to be paid to this in the case of the installation of geothermal systems in (possibly) contaminated locations. Moreover, measures need to be taken to prevent the materials used in the drilling operations from contaminating the groundwater.

Besides its high temperature, the formation water pumped up by geothermal systems is also highly saline; typically several times greater than seawater. Apart from the as-yet unknown impact that the heat radiation around the well might have on groundwater quality, it is also extremely important to prevent any leakage of this highly saline water into the groundwater. This risk of groundwater contamination can be considerably limited through the use of multiple-casing well constructions, using sufficiently corrosion-proof materials, in combination with effective leakage monitoring and control measures.

It is also critical to reduce the risk of surface leakages of the saline formation water that is released during the development and regeneration of the production and injection well. Large quantities of this water are temporarily stored in above-ground ponds before being processed. 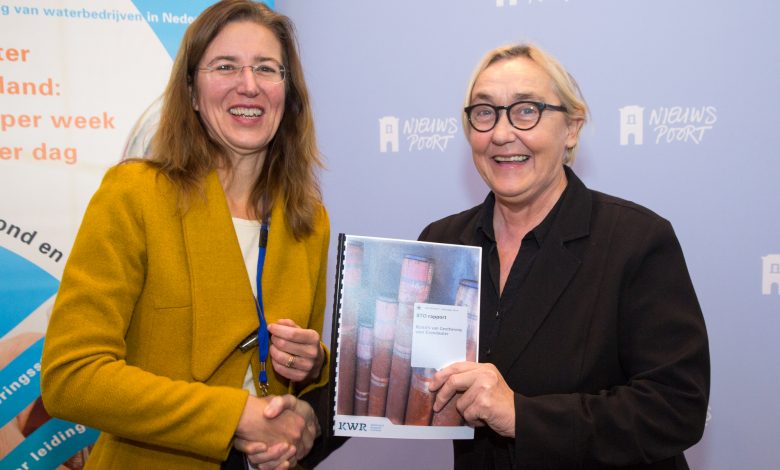 KWR carries out research into the use of the subsurface for a sustainable energy provision. Geothermics is one of the contributing technologies, alongside aquifer thermal energy storage and high-temperature storage. To support the application and improvement of geothermal systems in the Netherlands, we examine the operational aspects, such as the occurrence and prevention of corrosion, scaling and well clogging. In addition, we research the interaction and the possible undesirable effects of the various uses of the subsurface. The goal is to make use of the subsurface as optimally as possible, and to do so in a sustainable manner.