Over 250 participants from over 40 countries and more than10 scientific disciplines participated in As2018. This shows  the worldwide importance of the topic; arsenic in the environment. From July 1 to 6, Erwin Beerendonk and Arslan Ahmad attended the As2018 conference in Beijing (China) on “Environmental Arsenic in a changing world”. After 2 years of preparation by the organizing committee, including Arslan Ahmad, the conference on Arsenic in the environment was a big success!

In the opening session of the conference I presented the DNA of KWR: “Bridging science to practice” and “Collaboration within the water cycle”. Especially “bridging science to practice” was repeated several times during the following conference days with the aim to translate all important scientific research on arsenic to real life solutions for different socio-economic regions in the world.

For me, this conference was very special because of the fact that a lot of scientific disciplines came together in Beijing to discuss one topic: arsenic. Scientists with their background and knowledge in geology, hydro geochemistry, toxicology, biology, medical biology, food safety, agriculture, environment, water treatment and sludge treatment all presented their research on arsenic. Besides the high amount of scientific disciplines, also people from almost all continents in the world were present, from North- to South America, from Europe to Africa and from Asia to Australia. This variety in background of the conference attendees led to very interesting discussions and knowledge exchange!

We were mainly focused on the sessions about water treatment. In these sessions a lot of work was presented on adsorptive media and co-precipitation of iron and arsenic. A lot of presenters mainly showed fundamental research, often missing the link or outlook to future application, costs and sustainability. This was one of the reasons why presentations from Bert van der Wal (Evides/Wageningen University), Patrick van der Wens (Brabant Water) and Arslan Ahmad (KWR) were different because they showed results on applied science and the background of the target value of 1 µg/l arsenic in drinking water in The Netherlands. Especially this low target value (the WHO guideline is 10 µg/l) got a lot of interest and some people hope that other countries will follow to target 1 µg/l arsenic in drinking water. This will not be the case in the developing countries who still have trouble to meet the WHO guideline and need very effective and simple water treatment systems to remove a high amount of arsenic (ground water concentrations are up to 1500 1 µg/l).

During the closing session on July 4, Prosun Bhattacharya (KTH Royal Institute of Technology and member of the As2018 organizing committee) announced that the next conference, As2020, will be organized in The Netherlands with KWR as the lead partner! 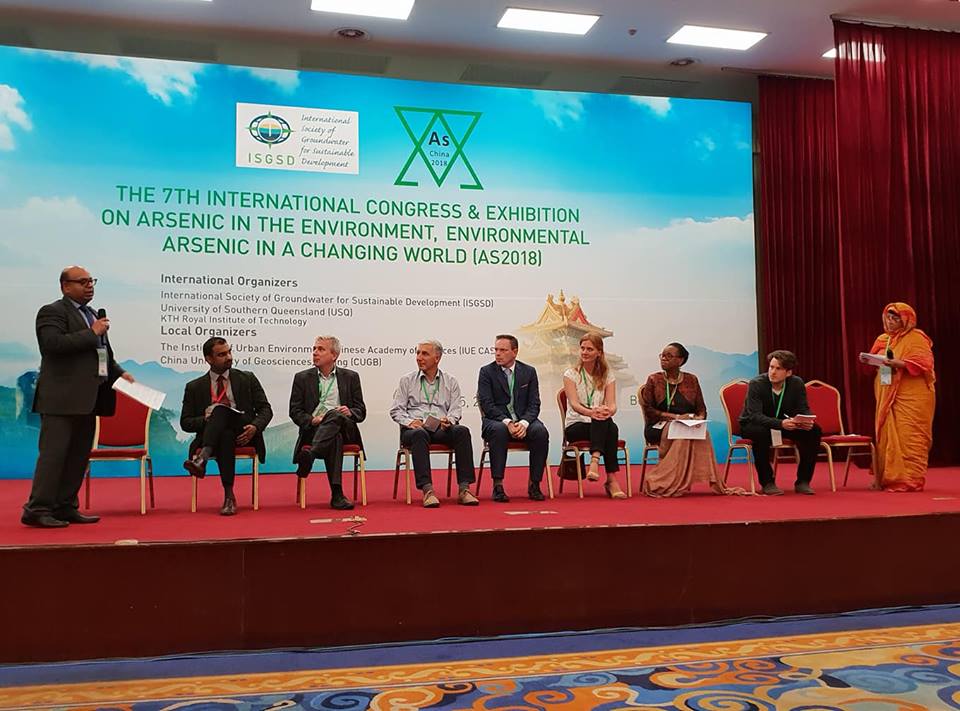