New developments in the membrane synthesis aim at producing a membrane that is as close as possible to the ideal membrane, in which contaminants are retained and useful salts flow through. This increasingly involves using membranes in which nanotechnology plays an important part.

Membranes are extensively used in the production of high-quality water from all kinds of sources. Drinking water production also makes use of different types of membranes for the removal of particles, pathogens (viruses and bacteria), and dissolved substances like micropollutants, natural organic matter and salts. Tight (high-pressure) membranes are capable of removing these contaminants in a single stage and robustly. But one problem with regard to drinking water production is that the membrane retains all the salts, which means that the water produced is demineralised. Moreover, this treatment is relatively energy-intensive: the retained salts in the water create a high osmotic pressure which has to be compensated. To make the water potable following high-pressure membrane treatment requires a further remineralisation post-treatment stage. An ideal membrane for the production of drinking water would largely retain the above-mentioned contaminants, while (partly) letting the salts flow through, thus avoiding the need to remineralise and to lower the required pressure.

What is the performance trade-off?

The membranes currently in use are produced on the basis of empirical methods. The various membrane suppliers have improved the performances of the membranes, but the improvements have been relatively slow and incremental. Moreover, today’s membranes are subject to what is known as the ‘performance trade-off’. This refers essentially to an increase in the membrane permeability for water at the cost of the permeability for salts and micropollutants, so that the selectivity for these substances diminishes. Besides, the selectivity of tight membranes for small neutral substances is relatively low, making expensive post-treatment processes necessary.

New generation membranes based on nanotechnology

There is thus a need for a new generation of membranes that are not subject to the existing performance trade-off, have a high selectivity for small neutral substances, and are preferably also low-fouling. These membranes don’t need to be made on the basis of empirical methods but could be based on a molecular design. The new generation membranes could, for instance, contain aquaporins (protein channels), synthetic nanochannels, graphene (oxide), self-organising block copolymers and layer-by-layer technology. The latter type of membrane is made of relatively open membranes which are steadily made tighter with thin polymer layers. A number of these new generation membranes are being studied by the collective research programme of the drinking water companies (BTO2012-2017).

KWR keeps an eye on the development of new membranes that could play a role in drinking water production. The new BTO programme will be studying the layer-by-layer membranes. 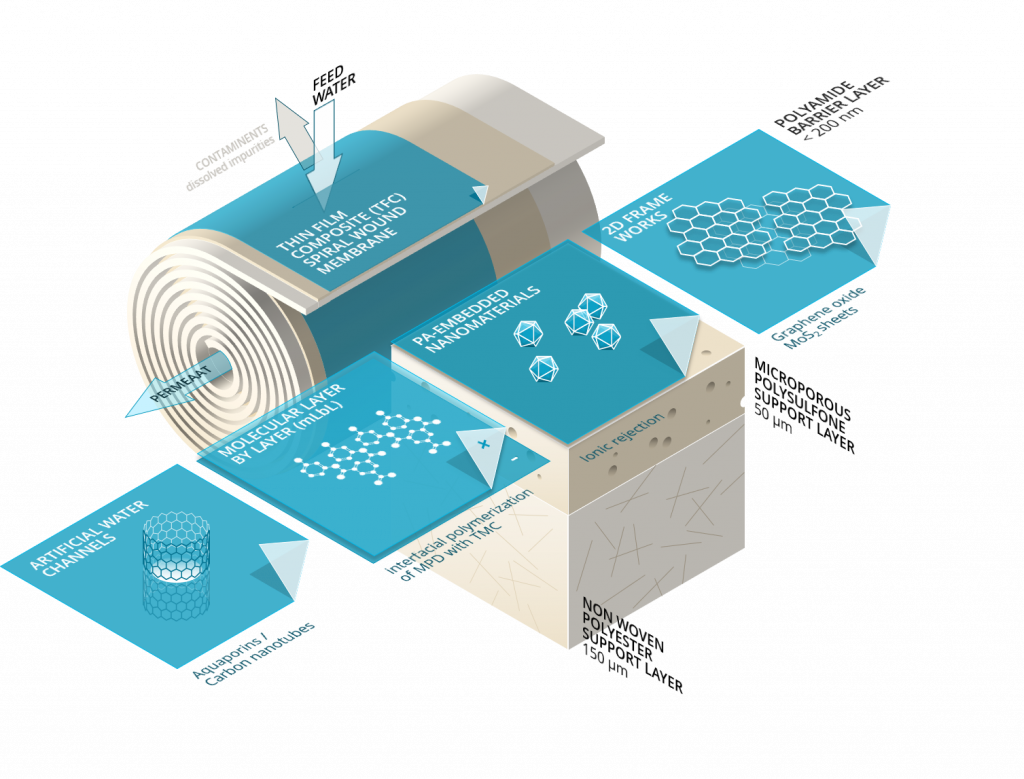