But the space available in the subsurface for heat storage is limited. Moreover, there is a trade-off between the performance of individual systems and total energy savings in an area, which increases as more systems can be accommodated. This is why it is important to establish how the full potential of aquifers can be exploited sustainably for geothermal energy purposes. This project will research how best to organise geothermal energy systems in congested areas.

More energy needs to be saved, including through geothermal energy

Geothermal energy is one of the techniques that has to contribute to achieving the CO2 emission reduction objective laid out in the climate agreement. Recently, in the detailing of the energy agreement, it was established that the contribution of geothermal energy to the supply of renewable energy has to grow from 5 PJ in 2015 to more than 20 PJ in 2023. The expectations for seasonal storage using open geothermal energy sources are particularly high, because the technique makes it possible to both heat and cool many different types and sizes of buildings.

But the subsurface’s potential is not optimally exploited

Geothermal energy sources accumulate in cities because they are installed near the buildings they supply with geothermal energy. The problem is that there is insufficient understanding or awareness of the trade-off between individual system performance and the total CO2 emission cuts resulting from the increased number of geothermal energy systems in a specific area. Because of prudence regarding system interaction on the one hand, and claim behaviour on the other, large segments of the subsurface in city centres are not being used for any energy storage, and thus not contributing to saving energy; while it is precisely in these congested areas that every square meter of ground surface needs to be used to achieve the energy-saving objectives. By allowing the installation of more systems, the performance of the individual systems might drop, but as long as this is compensated by the extra energy savings that result from the addition of extra systems, it remains a smart thing to do.

Despite the fact that only 1% of all non-residential buildings in the Netherlands have a geothermal energy system, there are now already more than 50 areas where measures need to be taken (masterplans/interference areas) to accommodate all geothermal energy systems. This will become an increasingly significant bottleneck over the short term because more and more areas are becoming ‘full’. To anticipate this problem, and to avoid having to develop complex masterplans everywhere, it is important that the systems now being installed take the changing circumstances into account, as more of the neighbours also turn to geothermal energy. A clear conception is needed on how to exploit the potential for geothermal energy in congested areas as optimally as possible.

This research aims to determine which conditions and frameworks would enable the intensification of the use of geothermal energy systems, with a view to maximising the contribution to CO2 emission reduction.

Clearer density boundaries for geothermal energy systems, within which the total CO2 emissions from the area are minimised, would allow the competent authority to easily steer close to the boundary and/or prevent that it be crossed. This research project will determine these boundaries (e.g., number of allocated m3/m2). This requires some theoretical/modelling work, but we will also examine practical situations, how to deal with vested interests (existing licenses), and how to transition from the current suboptimal situation to maximising the activated subsurface volume. In addition, another research project is studying the monitoring of heat and cold in the subsurface of congested areas, which will provide the basis for optimising management and governance. Several partners are involved in both projects, so that mutual exchange will be made easier.

New standards and steering possibilities concerning density parameters for open geothermal energy systems. These can be directly applied in daily practice and should be able to be anchored. The density parameters also reveal the extra potential that can be exploited. 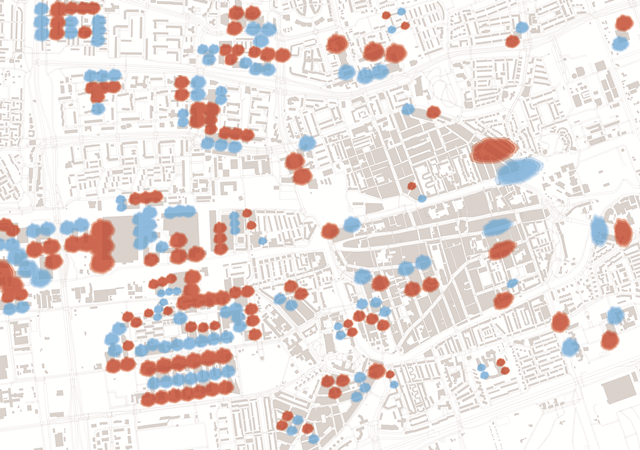 Overview of the temperature distribution in an aquifer used for geothermal energy.